In the spring of 2018, I was invited to apply for a competition organized by the City of Zurich. The task was to develop an artistic intervention (Kunst und Bau) for the relocated crime division of the city police station on M├╝hleweg. The new building is a stoneŌĆÖs throw from Zurich University of the Arts, where I serve as teacher and director of the Masters program in Fine Arts. My proposal involved several other artists participating alongside me, so curating played a large role in the project. It entailed not just the harmonizing of multiple artistic voices, but also an arranging of the work with an eye to the police officers, victims, and criminals who would be spending time in the space.

My main reference point as I approached the competitionŌĆÖs brief was an essay by Carlo Ginzburg, a sort of ŌĆ£musical scoreŌĆØ for my concept. In his 1980 essay, Morelli, Freud and Sherlock Holmes: Clues and Scientific Method, the Italian historian links art history, medicine, and criminology by considering exceptional practitioners of each craft: Giovanni Morelli, Sigmund Freud, and Sherlock Holmes. I, in turn, paired these three figureheadsŌĆöthe inventor of an empirical comparative method for attributing paintings, the famous founder of psychoanalysis, and the quintessential detectiveŌĆöwith three works, each by an artist of our own time, John M Armleder, Denis Savary, and Clifford E. Bruckmann. Despite considerable interest from the judges, my project was sadly not selected. However, it was a pleasant consolation to be invited to present some of these ideas in a different form in the group show Pickpocket at Kunst Raum Riehen by Katharina Dunst and Boris Rebetez.

Of course, developing three artworks for a police station is very different from participating in a group art show. I┬Ācould have presented a model of the crime division with miniature versions of the three works, but I prefer to use Pickpocket as┬Āa platform to extend an idea that is anchored in┬ĀGinzburgŌĆÖs essay: the search for artistic clues in images, their reproductions, their history, and their stories. To express this, I have focused attention on one body partŌĆöthe earŌĆöthat was especially significant for Morelli, but also for Sherlock Holmes, Vincent Van Gogh, Herg├® (LŌĆÖOreille cass├®e, 1937), andŌĆötragicallyŌĆöfor John Paul Getty Sr. and his grandson John Paul Getty III (see Ridley ScottŌĆÖs All the Money in the World, 2017 and Simon BeaufoyŌĆÖs Trust, 2018). For Morelli, the painted ear was a key feature for identifying an artistŌĆÖs work. TodayŌĆÖs biometric research seems to prove him right. Ears carry very specific personal information. Each ear is an anatomical synecdoche, a representative piece of an unknown whole.

Two ears are on display at Kunst Raum Riehen: one in the style of Botticelli, and the other a copy of the mutilated ear belonging to the kidnapping victim John Paul Getty III (in two pieces, the part that remained attached to the young man, and the part his kidnapper sent in the mail). Both objects were produced by the artist Kevin Aeschbacher using 3D printing technology based on portrayals of the famous ears. The sheer quantity of these reproductions, in innumerable drawings, paintings, prints, photographs, and films (which are all now further reproduced in digital form), poses the question of diluted authenticity. What is genuine? What is invented?

The two objects were the focus of a public discussion on October 31, 2019: GinzburgŌĆōGetty, Histories of Ears. 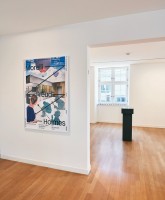 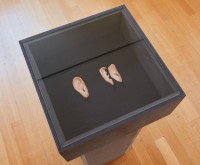