Sung, talked, danced performance, in one prologue and four acts, for six performers

Deserting Las Vegas is a project putting together musicians, dancers, singers, artists and intellectuals. The booklet and the music were written for this occasion. The performance presented itself as a work in progress, involving the interpreters in the process of creation. Freely inspired by Bertold Brecht‚Äôs Aufstieg und Fall der Stadt Mahagonny, this piece stages characters in search of sense, pulled between their contradictory desires to think, entertain themselves and make money.

Deserting Las Vegas was created in the frame¬≠work of the Eternal Tour festival 2011‚Äôs edition, which traveled from New York to Las Vegas from December 2nd to 23rd.

Text:
six characters
in the middle of a desert

The opening of Deserting Las Vegas takes place in the middle of the desert.

This desert shows several semantic dimensions. It‚Äôs a geographical place: the Mojave Desert, named after the Indian tribe who once lived in the land located in the actual States of California, Nevada and Arizona. But the desert is also, symbolically, the place from which nowadays, we are to think the contemporary world. The disappearance of the question of being, in the most nihilistic period of western metaphysics, is the horizon in which the desert advances.

Six figures, four of which embody both an existential and philosophical point of view, try to develop several strategies to escape in one way or another the desert, deserting the absurd gulf between sense and nonsense, being and nothingness, in which they are stuck. Boredom becomes the affective atmosphere permitting and opening a space to ask questions. Leisure can no longer turn us away from this task: how to think after devastation? Away with utopia and multiculturalism!

The extensive states of consciousness, advocated by the apostles of the psychedelic sixties, has become hygienic: a trip on Las Vegas‚Äô Strip, but within the limits of the licit, the ultimate thrill without abusing substances, neon powder as unique vector of ecstasy. In this disenchanted context, an artistic expression seems to be the ultimate possible place for an eventual exceeding of nihilism. Gender, class, minorities, domination, destruction, Blacks, Jews, Mexicans, Arabs: everybody is the ‚Äúindian‚ÄĚ, the outcast, of someone‚Ä¶ How can we nevertheless be together in contemporaneity? This is the leitmotif of this performance.

Between popular music
and art music

Inspired by popular, religious, layman music (polyphonic singing, gospel, ballad, ritornello), Deserting Las Vegas‚Äôs composition mixes without hierarchy different styles and techniques. It develops itself using the repetition process inherited from the american minimalists and in the perspective of performing arts leitmotiv, boredom being materialized by circular movements. In addition to reknown lyrical singers, the punctual participation of amateur singers pays tribute to the popular tradition. The idea here is to offer, to experiment and to risk news paths for contemporary opera.

The musical creation is thought in adequacy with the performance‚Äôs itinerant dimension. The singing solo or choir parts are mostly a cappella. The¬†instrumental and electroacoustic parts are broadcast through record players and computers. The musicians are thus replaced by the two composers who‚Äôre therefore becoming DJs.

Playground:
a pole, a rope and a garage

If being is the indecisive and inexhaustible philosophical key question, it‚Äôs nevertheless the appearing that orients our Being-in-the-World, according to Hannah Arendt. Appearing: I exist in the middle of all possible postwars‚Äô deserts because someone is looking at me, and because I am listening to someone else too. Appearing: how to act? How to dance? How to sing? The performance‚Äôs scenography takes place around a pole dance; a pole also suggesting G√©ricault‚Äôs ‚ÄúThe Raft of the Medusa‚ÄĚ that allows one to survive. A pole is a pole, beyond its representation or evocation. Las Vegas is an oasis in the middle of the desert: how to describe and apprehend this city, a mirage at first sight? With a lyrical voice, a music-hall inspired choreography, contemporary music and a soundscape? How to move in this space and how to get out of it? Gestures can be minimal and sufficient: everything is heavily loaded. Or¬†should we move and magnify body and mind to celebrate life beyond any type of illusion, following Fluxus ‚Äúart is life‚ÄĚ.

The link, metaphorically suggested with a rope, would be the answer to verbal and non-verbal languages, permitting a plurality of simultaneous expressions, genders and schools‚Äô juxtapositions in a singular location: a garage where a group of artists are getting their vehicle fixed up. This indeed is a Ready-Made set. It‚Äôs the place where movement is temporarily stopped, opened hoods and silent motors. It‚Äôs precisely from this stand-by and this silence that Deserting Las Vegas begins. 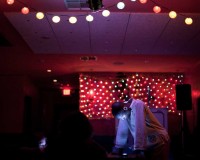 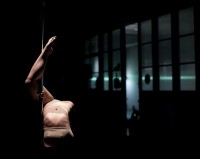